The Camino routes stretch for hundreds of miles across Europe weaving a network of wonderful trails connecting tiny villages, towns and cities. There are many beautiful towns on the Camino de Santiago routes, big and small, and today we share some of our favourites with you to inspire your next Camino trip: 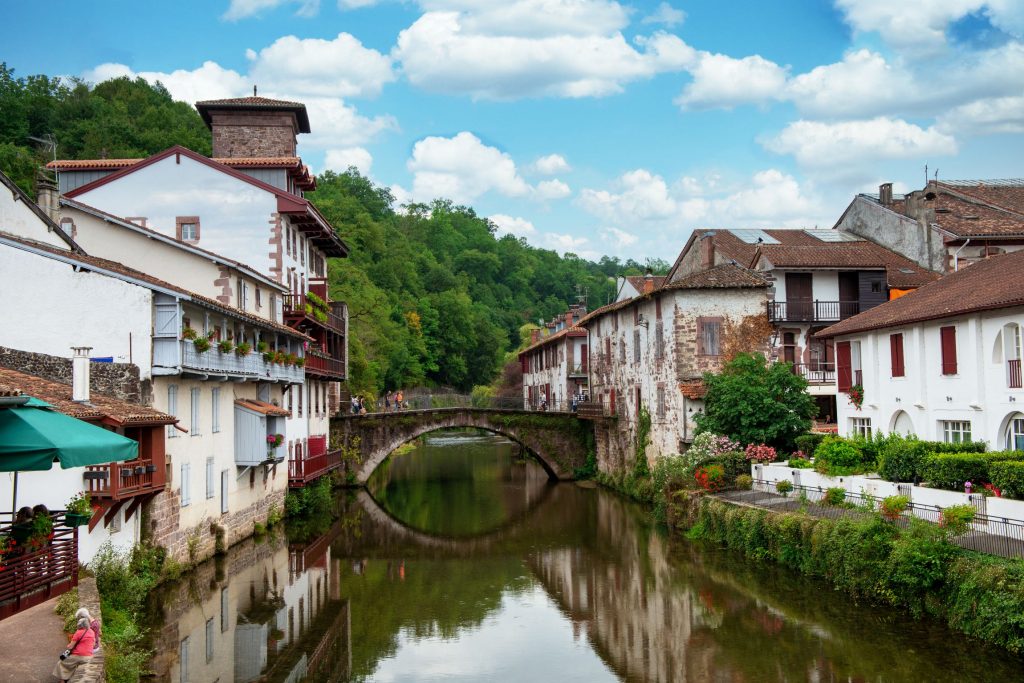 At the foot of the Pyrenees, on the border between France and Spain, we find the pretty Basque town of St Jean Pied de Port, where thousands of pilgrims start their Camino journey each year.

St Jean is a beautiful walled town of cobbled streets and traditional townhouses in red and white, crowned by a 17th century citadel fort, from where you can take in fantastic panoramic views of the surrounding landscape, including the mighty Pyrenees, the first stage of the pilgrims’ journey.

The energy and excitement is palpable, as pilgrims from all over the world walk down Rue de la Citadelle, across the Porte St Jacques and over the pretty bridge on the River Nive, fresh and ready to embark on their Camino adventure.

But St Jean Pied de Port is not only the starting point of the Camino Frances route, it is also the place where many Camino routes from further afield in France converge, such as Le Puy or Vezelay.

O Cebreiro on the Camino Frances

Also on the Camino Frances, and after a hard climb, pilgrims reach the village of O Cebreiro, a place that will make you feel like you are travelling back in time. Part of the village is in fact an ethnographic reserve, composed of various traditional round houses known as ‘pallozas’, thatched cottages, surrounding the 9th century Santa Maria Church.

One of the pallozas hosts the museum, where visitors can step inside one of these unique dwellings vernacular in the region which are built of slate or granite stone with conical thatched roofs; as well as admiring a display of traditional furniture and other artifacts.

Muxia on the Finisterre Camino

After reaching Cape Fisterra on the Camino to Fisterra pilgrims can continue along the magnificent Atlantic coast to the fishing village of Muxia, small in size but with plenty of character.

Pilgrims have flocked to this tiny village by the Atlantic Ocean to pay reverence to its Virxe da Barca at the sanctuary but also its ‘magic’ stones, believed to cure ailments and even predict events. This is a region of stunning coastal landscapes as well as fascinating legends and myths, where pagan beliefs often mix with Catholic tradition.

Baiona on the Portuguese Coastal Camino

Not to be mistaken with the French town of similar name, Baiona is an elegant medieval town in the Rias Baixas of Galicia, on the coastal Portuguese Camino route.

Wandering the cobbled streets, lanes and little squares in the Old Town, it is easy to picture Baiona in the olden days when kings, pirates and nobles battled it out for its ownership. Sitting majestically by the bay, the Monterreal Fortress has seen its fair share of history happening and power struggles but today it is open to all visitors as a luxury Parador hotel.

Baiona has been an important port for many centuries and it is here where news of the discovery of America first arrived in the 15th century. The town celebrates the ‘Arribada’ festival remembering this important date.

Across the Bay lay the pristine Cies Islands, and if you can, we highly recommend taking the ferry from the town to explore this virgin paradise in the middle of the Atlantic. 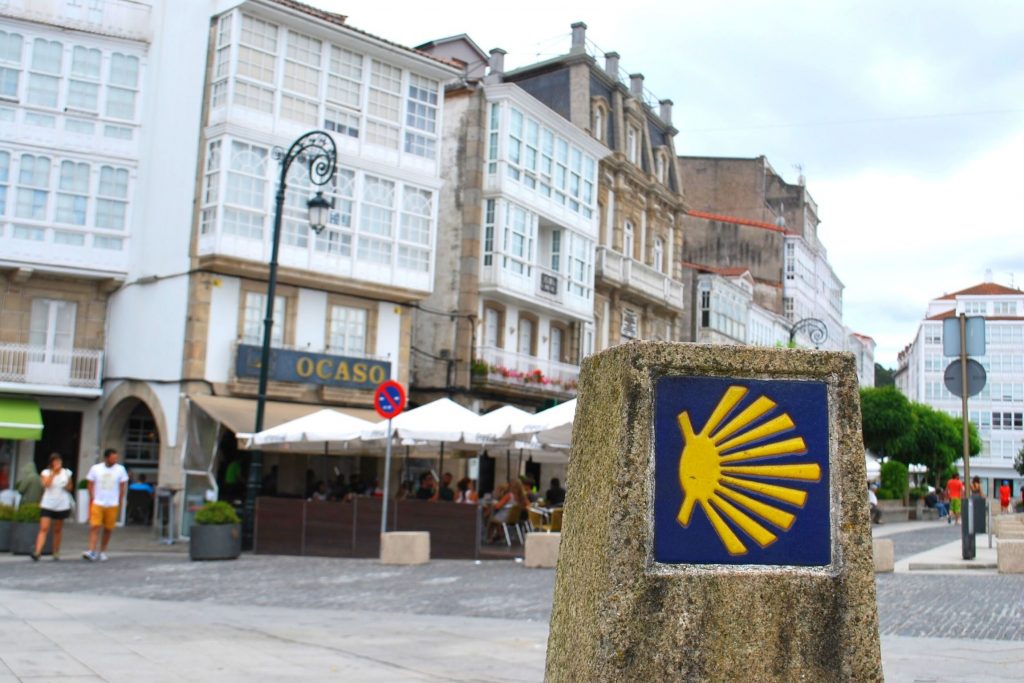 Betanzos on the Camino Ingles

Betanzos is one of our favourite towns on the Camino Ingles route and one of Galicia’s most beautiful too.

In addition to its historic quarter of quaint cobbles, medieval churches and traditional white balconies; Betanzos is a hotspot for great food and regional gastronomy. If you are a fan of Spanish tortilla, you are in for a treat, as Betanzos has its own local take on this classic.

Betanzos is also home to home styled taverns known as ‘furanchos’ where locals sell their homemade wines and food for a few euros.

Viana do Castelo on the Coastal Camino Portugues

Each August, the image of Nossa Senhora da Agonia, patron saint of fishermen, is paraded across the streets of Viana and taken to bless the sea in one of the town’s most important festivals.

It is a tradition that honours the sea that shaped and has been the livelihood of this charming town in the North of Portugal for many centuries.

Viana flourished in the 16th century, when Portuguese explorers, merchants and traders made Viana’s port their base bringing wealth to the region, and building some of the incredible townhouses and palaces we can admire as we explore the town today.

Go for a stroll along the seafront to feel the Atlantic breeze and for incredible sweeping panoramic views of the town and the coast, take the cable car up to the Santa Luzia Sanctuary, 200 metres above the town. Viana do Castelo is on the Coastal Camino Portugues route to Santiago.

Tui and Valença do Minho

Further up, on the shores of the Minho River, on the Camino Portugues, we find the ‘twin towns’ of Tui and Valenca do Minho. Connected by the International Bridge, they face each other from opposite sides of the river, Valenca in Portugal and Tui in Galicia.

Once rivals on different sides of the border, the towns are now not just friendly neighbours but considered a cross border Eurocity. In Tui, once one of the capitals of Galicia, pilgrims shouldn’t miss the magnificent Cathedral-Fortress, and get their pilgrim passport stamped. In Valenca do Minho’s Fortress which dates back to the 13th century, you will take in some of the best views of the Minho River. 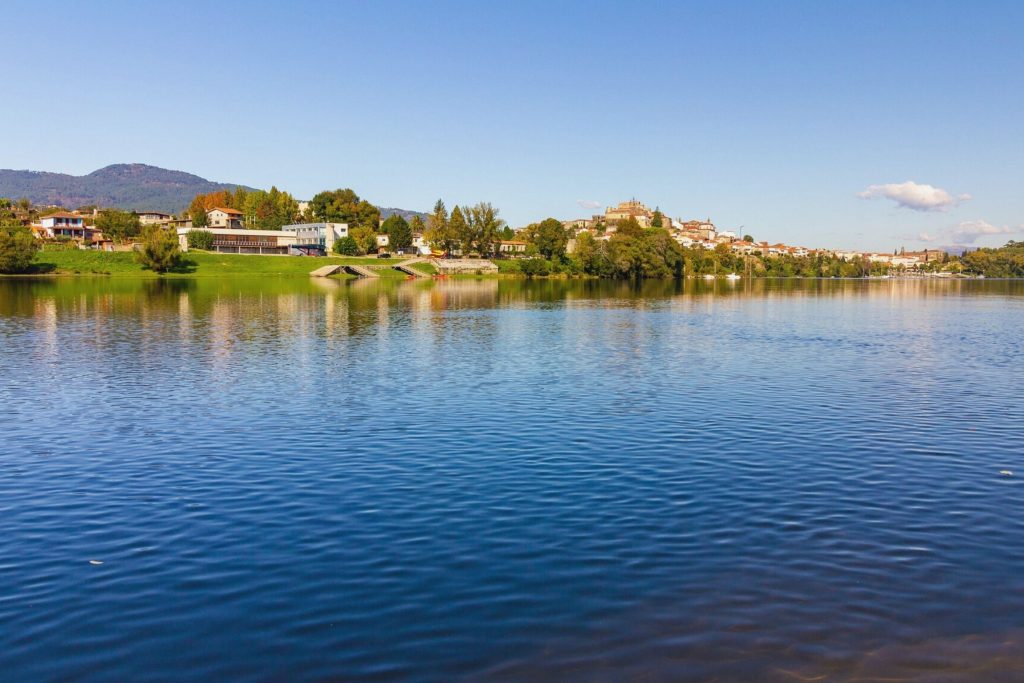 Ribadeo on the Camino del Norte

Ribadeo is the first town pilgrims encounter on the Camino del Norte as they cross the River Eo into Galicia; and one of the most wonderful towns on the Camino de Santiago.

It is a classic coastal town with a busy port and a lively historic centre perfect for pedestrians. The Old Town is dotted with what are known as ‘Indiano’ houses, built by successful emigrants returning from the Americas in the 18th and 19th centuries, bringing with them colonial styles and flamboyant, often very ornate ideas for their ‘big houses’.

Don’t miss the town market, where you can find some of the local delicacies and the town’s most famous landmark: Cathedrals Beach, approximately 10kms outside the town.

Back on the Camino Frances, in the heart of La Rioja region, Santo Domingo de la Calzada is the perfect example of how the influx of pilgrims on their way to Santiago has shaped the towns and cities along the way.

Santo Domingo is named after the saint who founded the town in the 11th century, to support and protect passing pilgrims. Bridges, churches, pilgrim hospitals and even the town wall were built to host and assist pilgrims; and this is the heritage pilgrims can still admire today, a thousand years later.

Also on the Camino Frances, in the heart of lush El Bierzo, the mountain town of Villafranca is sometimes referred to as ‘Little Compostela’.

Similarly to Santo Domingo, the history of Villafranca is closely linked to the Camino. The origins of the current town date back to the 11th century, when a monastery was established by French monks of the order of Cluny to protect and care for pilgrims.

Pilgrims unable to continue their journey to Santiago due to poor health, were also able to receive their ‘plenary indulgence’ from the 12th century Santiago Church in town, and that’s still the case today.

It is the only place other than Santiago itself where this privilege is afforded to pilgrims; without a doubt a tradition dating back to the days where the journey to Santiago was a long and treacherous adventure.

Santiago Church also has a ‘Puerta del Perdon’, the gate of forgiveness; which like the Porta Santa in Santiago de Compostela, only opens during Holy Years.

We hope you enjoyed our selection of beautiful towns on the Camino de Santiago and inspire your wanderlust. For more information about our Camino tours, get in touch with our travel experts.