Top things to do and see on a school trip to Krakow, a city of wonderful architecture, fascinating history and scrumptious food.

Poland’s second city is the best place for school groups to learn about the Second World War, the Holocaust and the Europe that emerged after one of the bloodiest episodes in its modern history. These are some of the top things to do and see on a school trip to Krakow a city of wonderful architecture, fascinating history and scrumptious food: 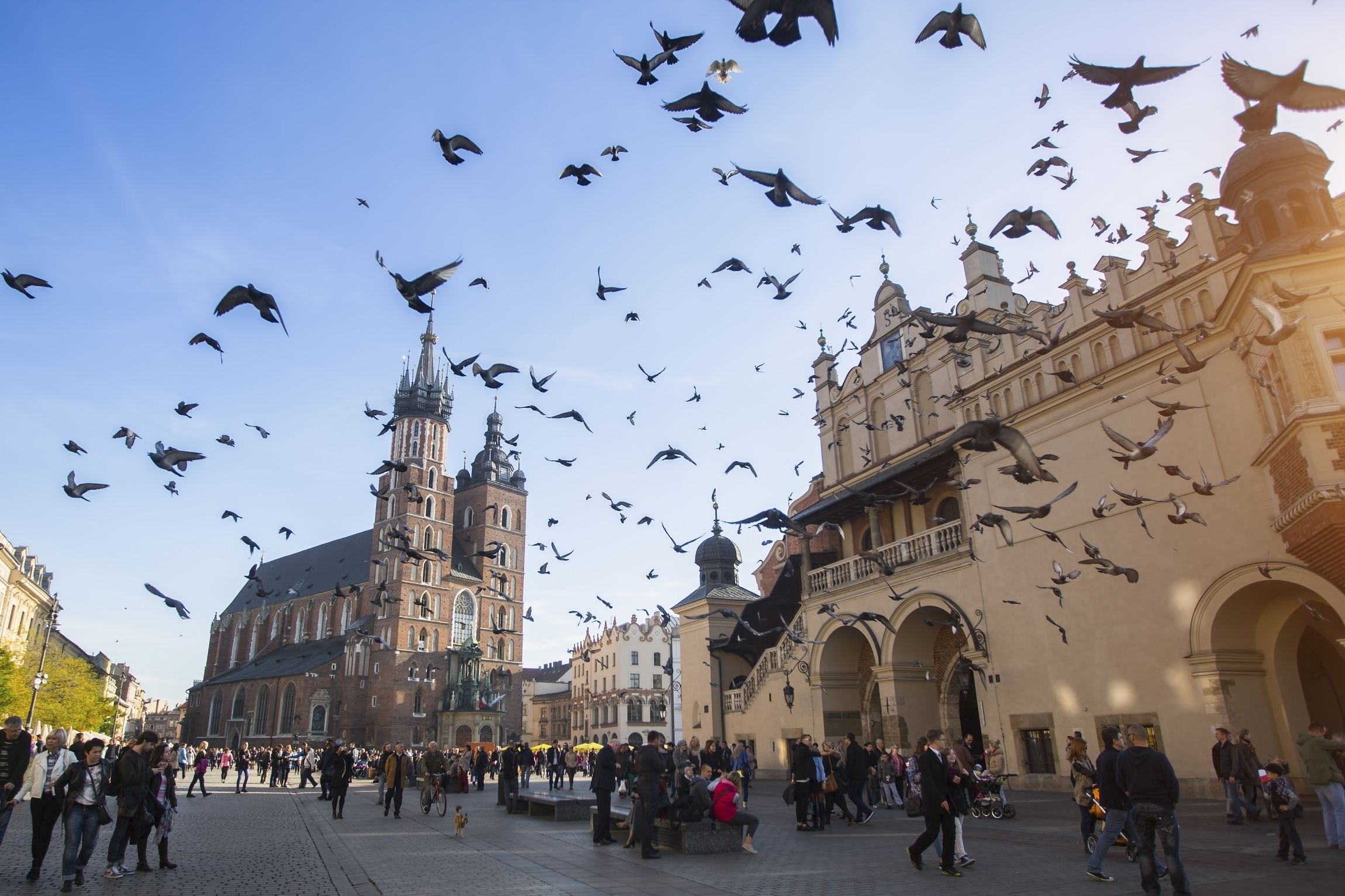 Krakow’s UNESCO listed Old Town, Stare Miasto, is the perfect place to start your tour of Krakow, wandering its cobbled streets, admiring its picturesque buildings and soaking in its lively atmosphere.

The Market Square, Rynek Glówny, is one of the biggest medieval market squares in Europe and a hive of activity with visitors and locals coming and going, enjoying a snack in the many cafes or buying and selling all sorts of handicrafts and cloth products at the stunning Sukiennice Cloth Hall.

St Mary’s Basilica is another iconic building on the Market Square. The Gothic 14th century St Florian’s city gate and the Barbican fortress are also not to be missed in the Old Town.

Rising above Krakow’s Old Town on the banks of the Vistula River, the imposing Wawel Hill with its medieval castle, cathedral and churches is considered a national symbol. It was the seat of Poland’s kings and queens and also one of the first settlements in the city, believed to have been populated since the 4th century.

A short walk from the Old Town, you will find the uber cool Kazimierz district, Krakow’s Jewish Quarter, and once its own independent city.

Today, this historic neighbourhood is a trendy cultural hub where you find quirky stores and galleries, cool street art and great food for all tastes embracing its multicultural heritage. It is also home of the Galicia Jewish Museum and hosts an annual Jewish Culture Festival.

If you haven’t watched Steven Spielberg’s epic award-winning movie Schindler’s List, there is something for your to do list before your school trip to Krakow.

Spielberg’s movie was filmed mostly in Kazimierz and tells the story of German businessman Oskar Schindler who managed to save over 1000 Jews by employing them in his enamel factory and bribing Nazi officials.

Today, Schindler’s factory is open as a museum, in fact two museums: the Museum of Contemporary Art and a division of the Historical Museum of the City of Krakow hosting a permanent exhibition about the city during the Nazi occupation from 1939 to 1945.

Over one million people, including children, were killed during the Holocaust at the Auschwitz Birkenau Concentration camp just outside Krakow. The camp is today a must-visit museum and memorial, honouring the victims.

A visit to Auschwitz is an unforgettable experience and valuable lesson for visitors of all ages, as they are confronted with the horrors and atrocities committed against innocent civilians by the Nazi Regime in the name of ethnic cleansing.

Listed as a UNESCO World Heritage Site since 1978, the Wieliczka Salt Mines are a mind blowing place and an absolute must-see on a school trip to Krakow.

Opened originally in the Middle Ages, they were believed to be the biggest source of salt in Poland. Over 700 years of history, 245kms of galleries have been carved and the mine has nearly 2500 chambers, including spectacular underground chapels decorated with chandeliers, artworks and sculptures carved in salt by the miners. The mine is so big that a visit to the mine only takes approximately 2% of the whole place.

Planty Park or the riverside walks along the Vistula River known as ‘Vistula Boulevards’ are lovely green spaces perfect for a stroll, a picnic or just to sit down and relax.

Food is an integral part of culture and Poles are really proud of their gastronomy. On a school trip to Krakow students will get to taste some of the most delicious (and child friendly!) Polish classics such as pierogies dumplings, golabki stuffed cabbage rolls and Krakow’s own Obwarzanek krakowski bread rolls and krakowska smoky sausage.

TIPS FOR A SCHOOL TRIP TO KRAKOW

-Introduce students to the attractions you will visit in advance, sharing a bit of the history and background

-Watch Schindler’s List or ask them to watch it at home, if they can

-If there are Polish students in the classroom, get them involved sharing their knowledge about the culture, food, language, etc… with the rest of the class

-Get them to learn a couple of basic words in Polish, such as please and thank you

For more information or assistance organising a school trip to Krakow, or more ideas for your school tour contact the JWT Schools travel experts.