10 Travel movies to explore from your sitting room - JWT Travel

We pick ten great travel movies that will transport you to other places, both in time and space, without leaving your own sitting room.

We have picked ten great travel movies that will transport you to other places, both in time and space, without leaving your own sitting room. 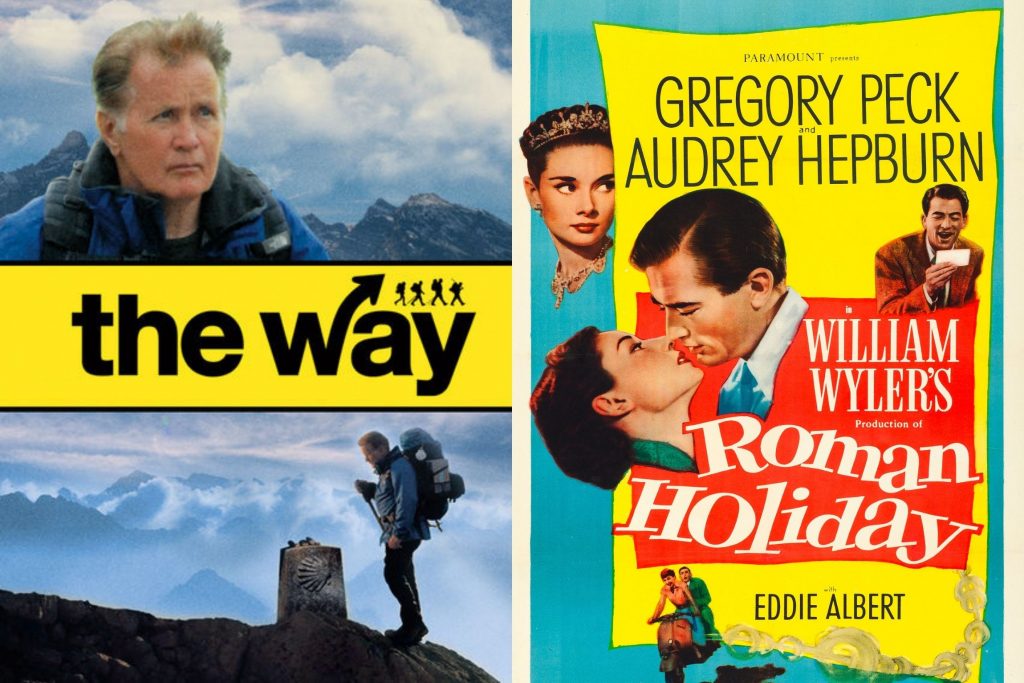 It will take you to: the Camino de Santiago

Written and directed by Emilio Estevez, the main character Tom is played by Martin Sheen, The Way was the first big movie inspired by the Camino de Santiago pilgrimage.

The movie follows the journey of Tom as he travels to Spain to retrieve the ashes of his deceased son. Before returning home, he decides to complete his son’s journey on the Camino de Santiago. The Camino will help him heal and come to terms with loss and grief, as he walks across Spain, challenging himself and meeting other pilgrims (with their own troubles) along the way.

It will take you to: Barcelona

Also known in some regions as Pot Luck, this entertaining French comedy transports us to the lives and adventures of the residents of a lively Erasmus flat in Barcelona where French student Xavier is spending the year. Amidst all the messy love entanglements and misunderstandings, we get to enjoy a tour of Barcelona.

It will take you to: The Pacific Crest Trail, USA

Starring Reese Witherspoon, Wild is the movie adaptation of Cheryl Strayed’s best selling memoir “Wild: From Lost to Found on the Pacific Crest Trail”. Both the book and the movie detail Strayed’s quest to overcome her personal turmoil and finding herself as she hikes over 1000 miles on her own from California to Oregon. It is one of those travel movies that make you realise the power of stepping out of your comfort zone.

It will take you to: 1950s South America

Travel and personal transformation seem to often go hand in hand both in life and travel movies. This is also certainly the case for The Motorcycle Diaries, the movie based on the travel diaries written by Ernesto ‘Che’ Guevara.

Before he became the iconic revolutionary leader, young medical student Ernesto ‘Che’ Guevara travelled the length of South America on a motorbike with his friend. On this adventure across 1950s South America young ‘Che’ would enjoy fun and games with his mate but would also encounter for the first time the continent’s rampant poverty and inequality that would awaken him politically.

While not strictly a travel movie, we love travelling back in time with this witty comedy that takes us to Berlin in the early days of Germany’s reunification. Alex’s mum Christiane suffers a heart attack before the fall of the Berlin Wall and wakes up from her long coma over a year later, only the country she remembers no longer exists.

Worried that his mother’s weak heart won’t be able to take all this change, Alex goes to great lengths to pretend Communism and East Germany are still alive and well, getting into hilariously funny situations.

It will take you to: Rome

Hollywood Golden Age stars Gregory Peck and Audrey Hepburn play the main characters in this romantic comedy with Rome as its stunning backdrop. Hepburn won an Academy Award for her interpretation of Princess Ann, the undercover princess roaming Rome and falling in love with reporter Joe. A must-watch classic travel movie.

It will take you to: Vienna, Paris and Greece

The three movies are like a little window into the relationship between Jesse and Celine at very specific points in time: the night in Vienna when they first meet, an afternoon they spend wandering the streets of Paris nine years later having gone separate ways and an afternoon in a Greek village, after another nine years have passed.

It will take you to: New York and Ireland

Based on Colm Tóibín’s novel, we meet young Eilis Lacey played by Saoirse Ronan, as she emigrates from her hometown in County Wexford in Ireland to Brooklyn in the 1950s to find a new life for herself.

In New York she finds not only professional opportunities but also love; however when she has to return to Ireland for family reasons, she feels torn between her old and new lives.

It will take you to: Italy, India, Indonesia

Eat, Pray, Love is another of those feel good travel movies based on personal memoirs of transformation, where the main character finds solace and a new sense of herself in faraway places. Julia Roberts plays American author Elizabeth Gilbert who travelled for a year after going through a divorce in her mid-30s. Gilbert spends time in Italy enjoying its food (Eat), finding spirituality in India (Pray) and Bali, where she found Love again.

It will take you to: Dublin

More about wandering than travelling, we love the way Once immerses us in the life of Dublin city, as we follow the two main characters: two struggling musicians busking in the city, played by Glen Hansard and Marketa Irglova. Falling Slowly, one of the movie’s great tunes, won the Academy Award for Best Original Song.

We hope you enjoy these great travel movies, do you have any favourites you’d like to share with us?

Get in touch with our travel experts for advice and ideas for your travel plans.