A brief history of the Cathedral of Santiago de Compostela

The spires of the Cathedral of Santiago de Compostela can be seen by pilgrims from Monte do Gozo, where they catch a first glimpse of the city of Saint James, as their Camino journey comes to an end.

Today we tell you a bit more about the origins and history of this masterpiece of Romanesque art and architecture which has undergone 10 years of extensive and detailed renovations and is now ready to display its full beauty and celebrate the Camino one more year. 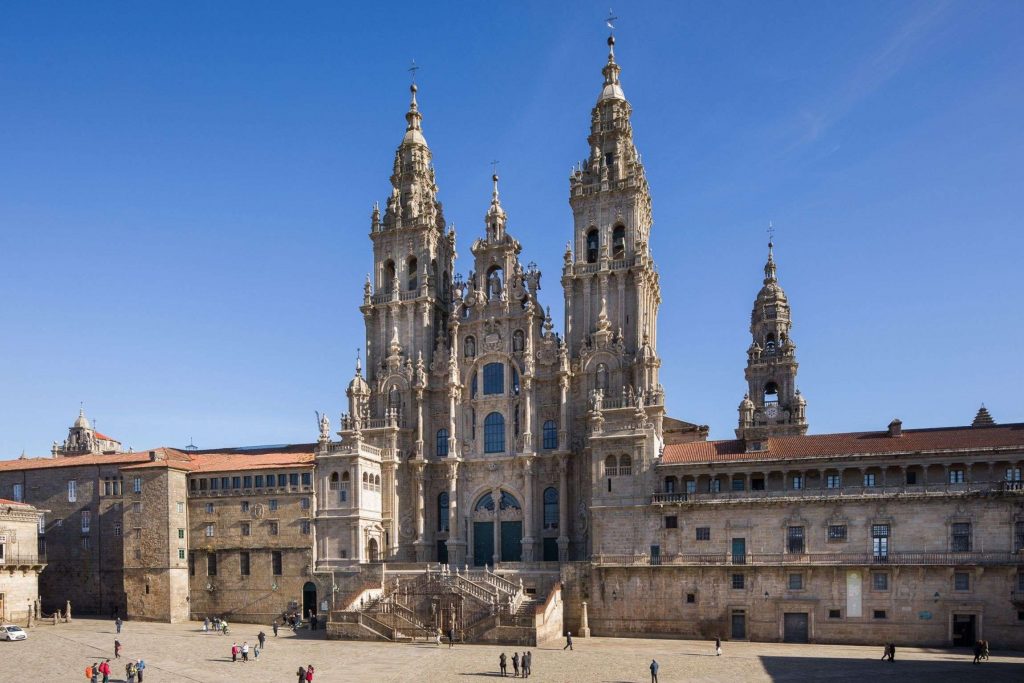 Since the Middle Ages, the heyday of pilgrimage in Europe, people from all corners of the continent and beyond travelled to the Cathedral of Santiago de Compostela, in Galicia, Spain; to honour and pay their respects to Saint James the Apostle.

The miles of tracks and trails that took pilgrims to Santiago would be known as the Camino de Santiago. For medieval pilgrims, this was a journey of not only faith but also in many cases of redemption and atonement, as well as discovery. Santiago de Compostela and its Cathedral would become one of the most important pilgrimages in the Christian world, along with the Holy Land and Rome.

Once in Santiago de Compostela Cathedral, pilgrims would attend mass and visit the resting place of Saint James the Apostle. Hundreds of thousands of pilgrims walk the Camino or visit Santiago each year to see the shrine and the city of Saint James where the remains of the Apostle still lie today, in a crypt under the Cathedral’s magnificent Main Altar.

SAINT JAMES AND THE CATHEDRAL ORIGINS

According to legend, the remains of Saint James the Apostle were discovered in the 9th century by a shepherd who had followed some stars that led him to the field where he found the body of the saint.

The city is named after this special event, as Santiago de Compostela literally means Saint James of the Field of Stars. Following the discovery, a small stone chapel was built in the year 813 with the support of Asturian King Alfonso II, who travelled to Santiago to confirm the authenticity of the relics and is considered the first ever pilgrim to Santiago.

This first shrine quickly became too small and Alfonso II the Great ordered the construction of a larger church, which was erected between 872 and 899. However this second church would be destroyed in the year 997 when Islamic leader Almanzor raided the city; he also took the Cathedral’s bells to the Cordoba Mosque and they wouldn’t return to Santiago until 200 years later.

Bishop San Pedro de Mezonzo would then get the shrine rebuilt in 1003 and again in 1075 when Alfonso VI king of León and the city’s archbishop Diego Gelmírez, encouraged the creation of a larger Cathedral to host all pilgrims. This building is the origin of today’s magnificent Cathedral.

The 12th century is considered the most important in the history of Santiago de Compostela, its Cathedral and the heyday of the pilgrimage to the city of Saint James. While many elements in different styles would be added in later periods, Santiago de Compostela Cathedral remains in essence a Romanesque Cathedral, the most spectacular in the Christian world at that time, as well as being Europe’s tallest building at 76 metres.

In 1181, Pope Alexander III granted the privilege of plenary absolution to all those visiting the Cathedral during a Holy Year, which takes place when Saint James Day, 25th July, falls on a Sunday. A document was also issued to pilgrims who had completed the Camino de Santiago, and this document still lasts to this day: the Compostela pilgrim certificate. The Basilica was consecrated in 1211 before Alfonso IX. 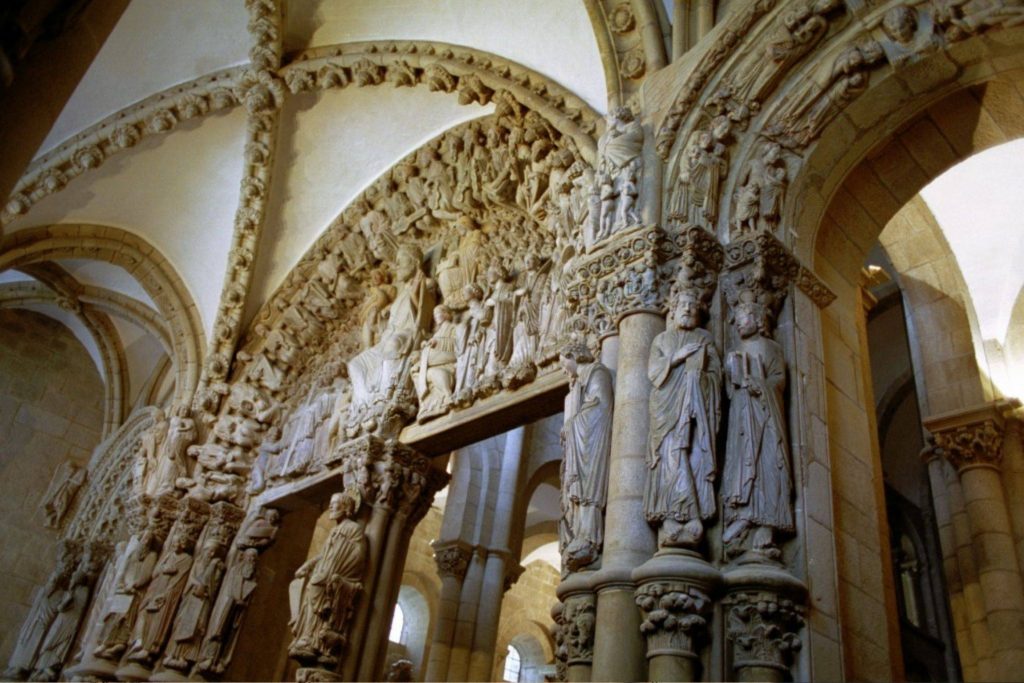 Mestre Mateo took over the building at this important time and designed the final sections of the naves, the crypt, the west towers and the exquisite Pórtico de la Gloria over the main entrance, which would take him 20 years to complete and it is an absolute masterpiece of Romanesque sculpture.

The magnificent Pórtico de la Gloria features a series of 200 sculptures inspired by the Apocalypse and representing various chapters and figures from the Bible, including the Apostle Saint James welcoming pilgrims after their journey. Following a delicate restoration project, the Pórtico da Gloria reopened to the public in 2018 so its beauty can be admired in full again by pilgrims to Santiago.

Mestre Mateo also created a unique ‘self portrait’ including a sculpture of himself at the bottom of the Portico. This sculpture was colloquially known as ‘Santo dos Croques’ (something along the lines of the ‘bumps saint’), as it was common for visitors to place the head on the sculpture’s forehead. This practice is no longer allowed to avoid erosion and preserve the sculpture but locals still know it by this name.

Over time, Gothic, Renaissance and Baroque elements were integrated into the original Romanesque shrine, giving Santiago Cathedral its unique look and character.

While the main structure remained the same, many important changes took place: new chapels were added and adapted, towers such as the 14th century Clock Tower were built, the Renaissance cloister replaced the original cloister, promoted by Archbishop Alfonso III de Fonseca.

The most iconic and recognisable change to the Cathedral however would be the Baroque facade we see today as we enter the Praza do Obradoiro, which wouldn’t be completed until the 17th century.

Built in the 16th century on the Praza da Quintana entrance, the Porta Santa or Holy Door is also known by the name of Puerta del Perdon or Forgiveness Door. It is unique as it is only open during Holy Years, Ano Xacobeo, and takes pilgrims straight to the crypt where the tomb of Saint James is located, under the Main Altar.

The Holy Door is generally opened on the 31st December ahead of the Holy Year. 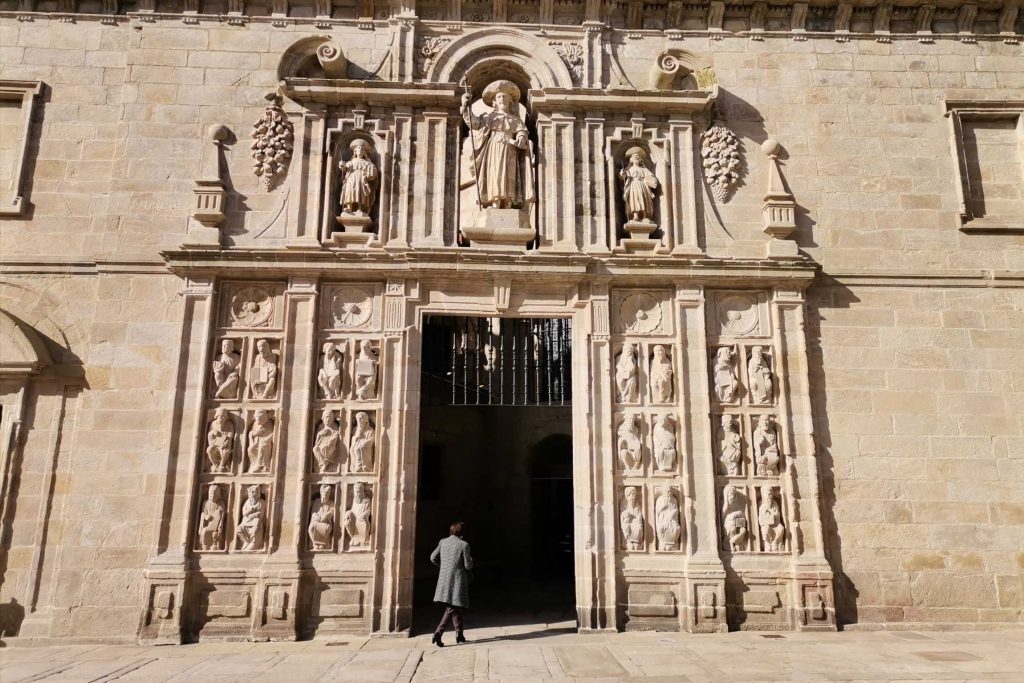 The Botafumeiro, which literally means ‘smoke thrower’, is the unique incense thurible at Santiago de Compostela Cathedral which swings impressively across the Main Altar on special dates and sometimes during pilgrim mass.

It is possibly the biggest in the world, weighing 53 kilograms and measuring one and half metres. It takes eight men, known as ‘tiraboleiros’, to swing it, using a complex system of pulleys and it can reach a speed of up to 68kms per hour!

While its origins are unclear, there are mentions of the Botafumeiro as far back as the 14th century although there have been many different censers over time. The current censer dates back to the 19th century.

Pilgrim Mass takes place at Santiago de Compostela Cathedral daily and this is often an emotional event for Camino pilgrims who have walked for many days, weeks and even months to reach Santiago. In addition to the pilgrim mass, there are many other mass services that take place at the Cathedral each day, including confession and mass in different languages.

Santiago de Compostela Cathedral is open every single day of the year to pilgrims.

Interesting guided tours of Santiago de Compostela Cathedral can be booked at the Cathedral Museum, to learn more about the history, architecture and art of this wonderful building, as well as the city. One of our favourites is the tour that takes you to the rooftop of the cathedral giving visitors a very unique perspective of the Cathedral and the whole city.

After a detailed conservation and restoration project that has lasted ten years, the splendour and beauty of the Cathedral of Santiago de Compostela can be fully admired again by visitors and pilgrims.

For additional details and information about tours and services at the Cathedral of Santiago de Compostela, we recommend visiting their official website: www.catedraldesantiago.com

For more information about our Camino de Santiago tours or to book your trip contact the JWT travel experts.